SOLIDWORKS Simulation 2018 introduces a new type of study, topology study, which enables designers and engineers to develop lighter, more innovative components. Based on the blockages and loadings, the topology study will “remove” elements from the finite element mesh until the target mass or the best stiffness / weight ratio is reached. This iterative process of removing elements is limited by design constraints, such as maximum allowable deflection and manufacturing controls.

Let’s discover this new study in more detail. For this, we are going to rely on a simple example that I implemented very recently. The model, shown below, is a simple pneumatic hood opening mechanism. Our goal is to refine the design of the arm (in blue in the image) to reduce its mass while maintaining its rigidity.

The first step in the design improvement process is to determine the loads to the arm when the hinge is in operation. The current version of the topology study can only be applied to parts containing a single body. But in the present case, the loads undergone by the arm are caused by the movements of the mechanism. By performing a motion analysis on the assembly, it is possible to calculate the loads at the connection points of the arm and then apply them to the part for analysis. The loads on the arm are represented by the size of the yellow arrows in the image below. The force in the gas spring is shown in the diagram. 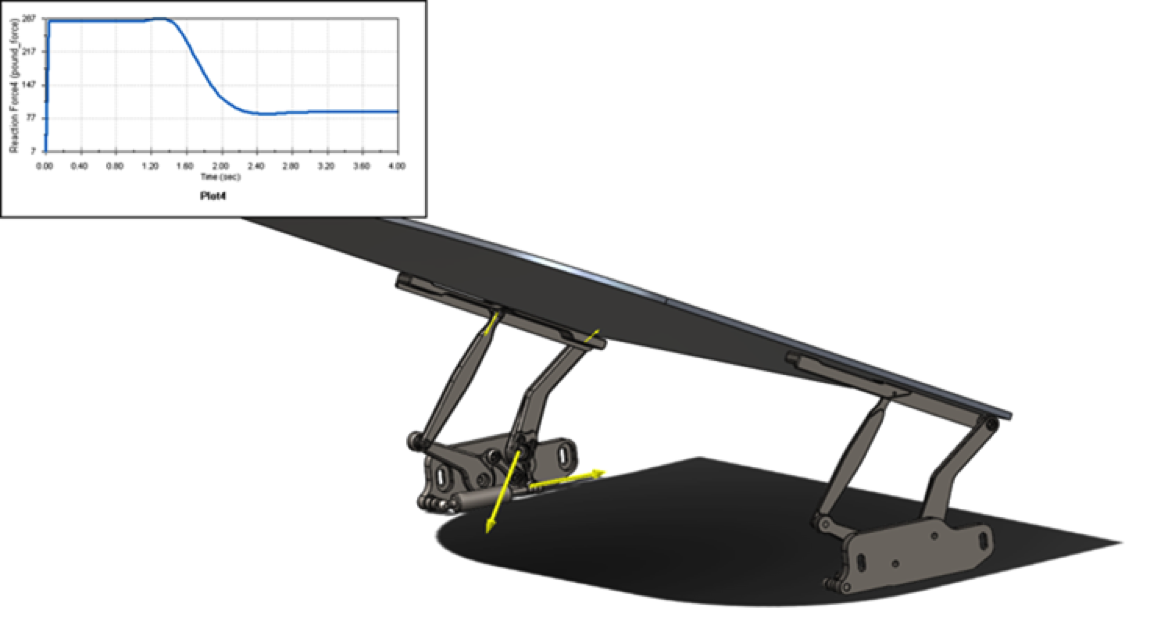 Note that it is recommended to perform a static study before any topology study. This makes it possible to ensure that the loadings applied do not lead to a state which does not respect the linear static assumptions of low deflections and stresses below the elastic limit of the components.

INTERESTING:   How to Change Colour Of Line in Solidworks?

Creating a topology study is not fundamentally different from creating a static study; materials, loads and blockages remain the same. The difference is in the two new entries: Objectives, Constraints and Manufacturing Controls. 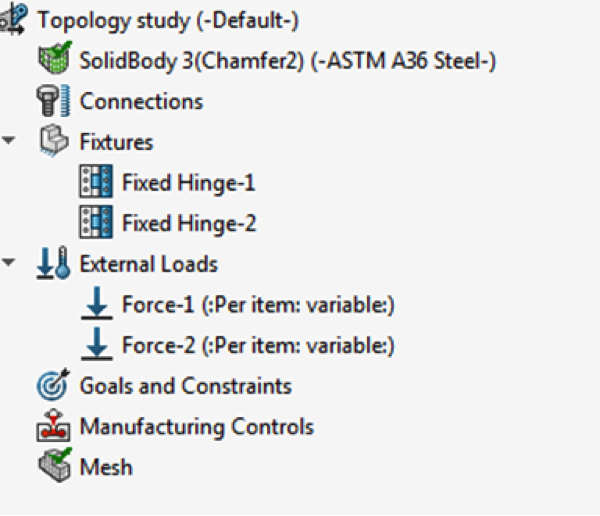 The objective of the topology study can be either to limit the mass or the deflection of your part, or to increase its rigidity (better rigidity / weight ratio). It is best to go for the best stiffness-to-weight ratio (which maximizes stiffness) first.

If you want to set a high limit for the displacement of the component during the topology study, use the objective “limit maximum displacement” or “limit mass” with an option “displacement constraint”. You will notice that all three goals consistently limit mass. The images below show the consequences on the results of a variation in the desired mass reduction. 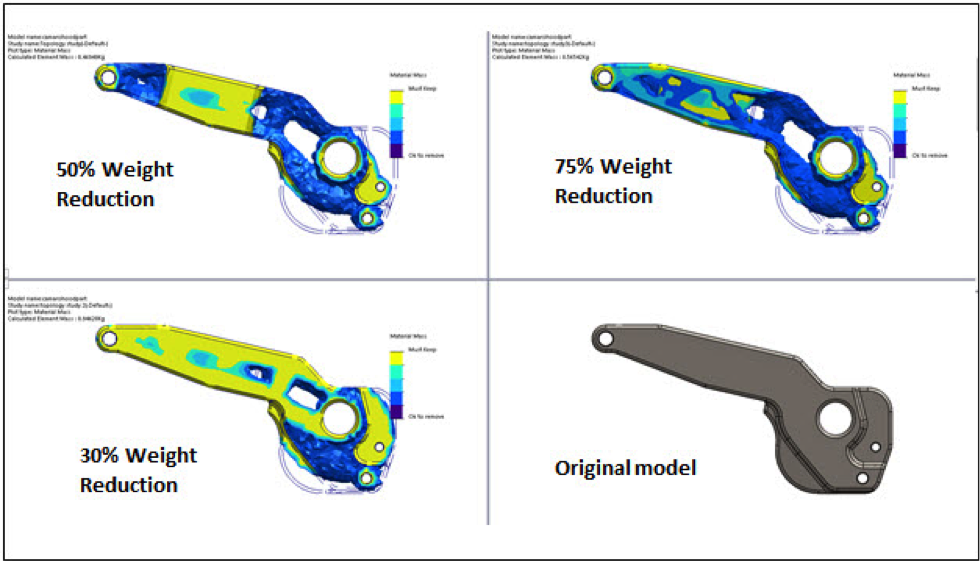 The final step in configuring the study is to add manufacturing controls. This is an optional step that is not necessary for the execution of the study. Note, however, that it allows both to maintain control over the resulting shape and to take into account downstream manufacturing methods. Manufacturing controls are preserved areas. You can therefore exclude certain areas of the model from the topological process. This concerns in particular the thickness control, which makes it possible to define minimum thicknesses, as well as the symmetry of the model and the definition of an opening direction for demolding, which is a molding constraint.

SOLIDWORKS Simulation includes a load scenario manager that is ideal for this simulation, as it helps determine the minimum mass of the component capable of supporting all loads exerted during hinge operation.

INTERESTING:   Register for SOLIDWORKS Manage seminars on June 29 or September 20 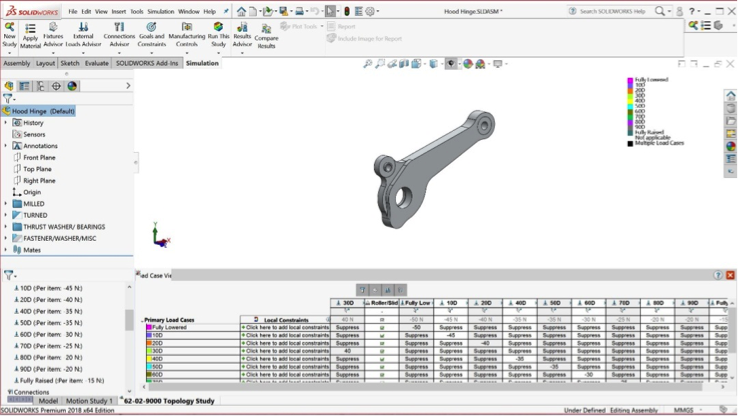 Once you get your topology results, how can you use them? For people who have access to a 3D printer, the result of a topology study can be exported as a smooth mesh. This mesh can be sent directly to a 3D printer for fabrication, but further validation of your component based on the materials used by the printer is essential.

But that does not mean that the study of topology is not useful for traditional manufacturing processes. The results of a topology study can be overlaid on the original geometry and serve as a guide to create cutouts and pockets for traditional CAM solutions.

Topology, 3D printing, and other emerging solutions are changing our expectations for product design. With the launch of SOLIDWORKS 2018, our customers have the opportunity to take advantage of these new technologies and manufacturing processes to bring innovative products to market. The use of the topology study combined with additive manufacturing allows companies to review the design of an existing part in order to reduce its weight and improve its performance (better strength / weight ratio). It also makes it possible to combine several pieces into one element in order to reduce their number.

Watch the Intro to Topology Optimization video below, then visit the SOLIDWORKS 2018 Launch website to learn more.

how to get text in solidworks ?

How to Cut Holes IN Cylinder Solidworks ?

how to draw rectangle in solidworks ?

how to create a reference point in solidworks ?

how to enter title block data in solidworks ? 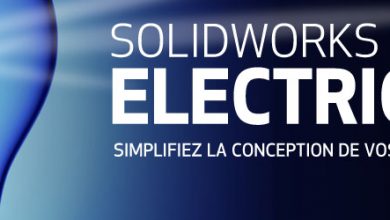 how to rotate text in solidworks model ?