The fight against a further spread of the corona virus (or slowing down its spread) is dominating almost all areas of public and private life worldwide these days. Industrial production, too, subordinates itself to this new task for the time being, provided that it has not been brought to a standstill for the time being by political decisions.

In this context, 3D printing is also in demand, as it is not least a technology that is faster and cheaper to manufacture. Even those interrupted by the virus global supply chains play a role in this. The possibility of additive manufacturing is an important resource for bringing the production of medical products, which has so far been largely relocated to China, back to Germany and Europe.

We are already observing how the industry is converting its production within a very short time. Instead of car seats or aircraft components, breathing masks, protective clothing, respirators or door handles are suddenly in demand. Also and especially for companies in the field of additive manufacturing, the question now arises as to what contribution they can make in this situation to saving human lives.

Appeal from the EU Commission

Since both protective masks and valves for breathing masks are becoming increasingly scarce on the European market, the EU Commission has also launched an important initiative. More than 250 companies are now following the Mobility goes Additive (MGA) initiative. These companies come from practically every industry, from automotive to sportswear, and are now bringing their materials and capabilities to the fight against the corona virus. Companies willing to help can contact the MGA portal themselves or the VDI.

Corona virus and 3D printing – a few use cases

– The ventilator from the 3D printer

The 3D model of a ventilator was recently developed in the Spanish technology center Leitat. That under the designation Headline 1 The device designed was designed by Mr. Magí Galindo, an engineer at the Spanish center before Dr. Lluís Blanch, Director of Innovation at the Parc Taulí Hospital in Sabadell and an expert in mechanical ventilation, undertook the medical validation. The decisive thing about the Leitat 1: This ventilator has been simplified in terms of its number of components and its complexity so that it can be manufactured as quickly and easily as possible. At the same time, however, there is also a certain resilience.

After a prototype of the Leitat 1 was very quickly produced by 3D printers from the various project partners, it proved to meet all the requirements and functionalities expected of a ventilator. Leitat therefore announced that 50 to 100 devices of this type are to be manufactured as early as next week.

Meanwhile, Spanish engineers are already working on the Leitat 2, a ventilator designed to better comply with the regulations of the Spanish Medicines and Medical Devices Agency.

Another challenge is to rebuild existing ventilators for which a specific Valve is missing or defective. Unfortunately, this problem has recently occurred very frequently, especially in Italian clinics.

For these cases, too, 3D printing offers a quick and inexpensive remedy.

The two Italian engineers Cristian Fracassi and Alessandro Romaioli proved to be downright heroes of the Corona crisis by producing the missing parts on a 3D printer and thus saving numerous lives.

The US 3D printing provider Stratasys is also proving to be a courageous corona crisis helper these days. So this company set a goal to produce at least 5,000 ventilator valves over the next week on its 3D printers in Texas, California and Minnesota. 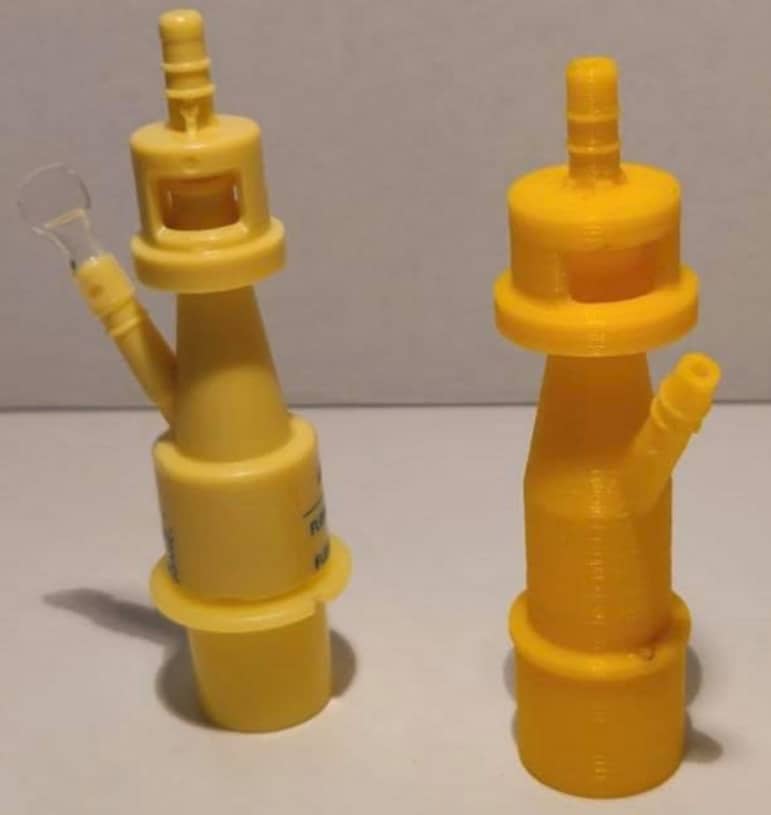 The original part on the left, the replacement from the 3D printer on the right
(Image – Isinnova)

– Face masks from the 3D printer

In addition to ventilators and the associated valves, face masks are also among the medical utensils urgently needed in the Corona crisis. Since there is an increasing shortage on the world market in this area in particular, there is an urgent need for fast and inexpensive solutions, such as those offered by 3D printing.

An interesting approach to this comes from the Czech 3D printing provider Prusa. Because the Prusa team has concerns about 3D printed protective masks in the narrower sense (poorly tested, too unsafe), they decided on 3D printed face shield, whose design has been available online for a long time, and improved these templates for easier 3D printing. This resulted in a holder for a shield, which is mounted in front of the face. In this way, medical personnel can be protected.

After a phase of prototyping, Prusa would be able to produce around 800 pieces a day with its 500+ 3D printers. 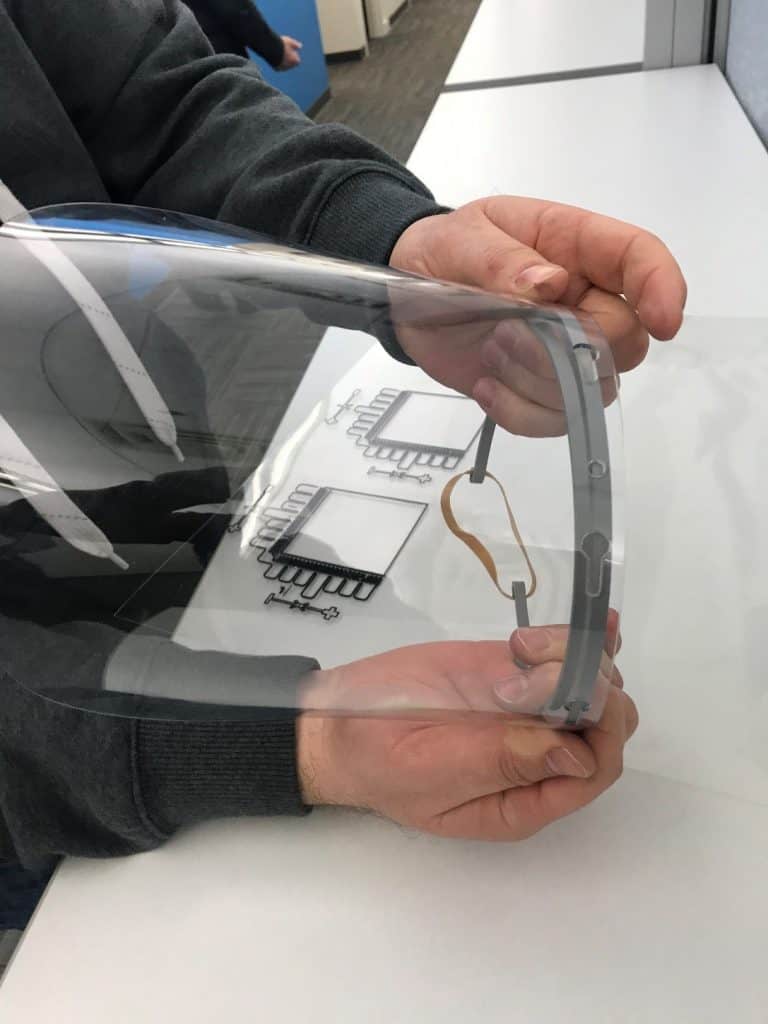 A part of the face mask from the 3D printer (Image: Stratasys)

Open source instead of proprietary solutions

The Open Source Masked Platform takes a different approach, which aims to get developers of 3D files for face masks to make their designs available to the general public as open source programs in order to save as many lives as possible.

Read more about the contribution 3D printing can make to solving the Corona crisis in our blog.

How do industrial 3d printers work?

How to network 3d printer?

How to build a house with 3d printer?

How to fill gaps in pla?